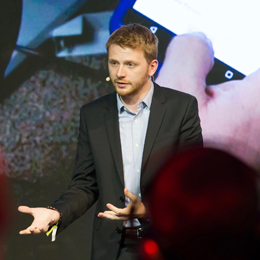 Catalin Voss is an engineer and entrepreneur who graduated from Stanford University with a MS and BSH in Computer Science. He founded the Stanford Autism Glass Project, an emotional learning aid for children with autism based on smart glasses like Google Glass, and the computer vision company Sension, which was acquired by GAIA Systems (owned by Toyota) in 2015. He has been recognized with several awards for his work, including, the Lemelson-MIT prize, Stanford’s Kennedy Medal, Forbes’ 30 under 30, Business Insider’s 40 under 40, and several profiles He is also a Venture Part-ner at Axel Springer, Europe’s largest publishing company.

At the age of 12, Catalin taught himself the basics of mobile soft-ware development when iPhone apps first became popular, and a year later, he started a German podcast about iOS development. His tutorials quickly gained > 200,000 views and became the #1 podcast on the German iTunes store. In 2009, he began working on iPhone apps for the U.S. Army and launched 5 applications. PayNearMe hired him as a soft-ware engineer to work on its Sili-con Valley startup’s mobile prod-uct working on the company’s iPhone, Android and web plat-forms and helped launch a mobile cash payments platform together with Macintosh-inventor Steve Capps while still in high school.

Catalin is a dynamic entrepreneur who advises decision makers from a wide range of businesses how technology and innovation change the way we do business around the world.

His highly informative and enlight-ening presentations make Catalin Voss a sought after commentator at conferences around the globe.