Co-Founder of Shazam and Entrepreneur 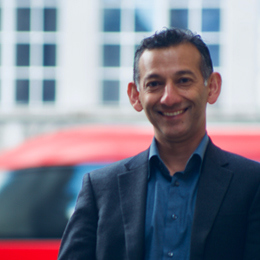 Co-Founder of Shazam and Entrepreneur

Dhiraj Mukherjee is an experienced digital business executive and entrepreneur, with a proven track record in both corporate and start-up environments. The co-founder of the billion-dollar company Shazam is currently Entrepreneur in Residence at PWC as well as an active angel investor, mentor to emerging technology startups and advisor to venture capital firms.

In 2000, Dhiraj co-founded Shazam, the world’s first mobile phone-based music recognition service. He raised £600,000 in seed funding and over £10m in venture capital investment. Dhiraj has been on the Board of Shazam since 2004, and is actively engaged in shaping overall product and corporate strategy. Dhiraj was previously Head of Banking Innovation at Virgin Money, where he was responsible for developing and implementing disruptive new digital banking products. He also worked in strategy and innovation roles within several other disruptive and high growth companies including Bauer Media, Infosys Limited, ?What If!, Reuters and Save the Children.  Dhiraj has a degree in Mathematical Economics and an MBA in Business.

Dhiraj shares with audiences the fascinating story of Shazam, one of pure innovation, foresight, and friendship. Business leaders can tap into his insights about the latest developments in technology. Dhiraj also speaks about leadership in a fast changing digital world and how to connect with the younger generations, in particular with Generation Z.

Dhiraj’s presentations, filled with his infectious entrepreneurial spirit are fascinating and highly inspirational.  A charming, witty and genuine speaker, Dhiraj knows exactly how to captivate his audience.