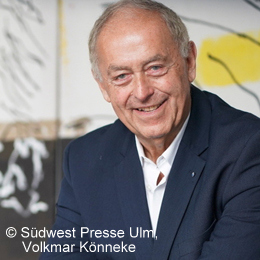 Professor Franz Josef Radermacher is the Scientific Director of the FAW – Research Institute for Applied Knowledge Processing, Germany. He is Professor emeritus for Data Bases/Artificial Intelligence at the University of Ulm.

Prof. Radermacher is one of the initiators of the Global Marshall Plan Initiative and prize winner 2004 of the Planetary Consciousness Award of the Club of Budapest and the future award of the city Salzburg. He has been a Steering Committee member in various committees on national and international level, e.g. since 1997 Information Society Forum of the European Commission (ISF) and Forum 2000 of the German Government. He is the Honory President of the Eco-Social Forum Europe, President of the Senat of the Economy e. V. and is a member of the Club of Rome. Also, he is a major consultant for the German Minister Dr. Gerd Müller, BMZ.

Prof. Radermacher offers insights into FAW’s research into information and knowledge processing. He explains the interplay between population explosion, resource overuse, generation of wealth, the role of the energy system and challenges for climate change. This is integrated into the analysis of geopolitical issues and present global conflicts into an overall picture. The role of the financial system, of innovation and corresponding rebound effects is discussed.

Highly informative and eye-opening, Prof. Radermacher backs up his engaging presentations with a wealth of examples from his detailed studies and research.