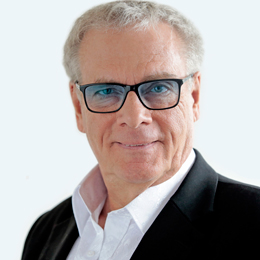 Jay Tuck was Executive Director at ARD, where he produced over 500 segments for the network and Jay served as combat correspondent in Iraq. His articles on security policy appear in leading publications in across Europe. His TEDx Talk was viewed by 1 ½ Million viewers.

His investigative reports on security policy, espionage and weapons technology appear in leading publications across Europe, including Cicero, Focus, Le Point, Stern and Welt. He is author of “High-Tech Espionage”, published in fourteen countries. For his current book, “Evolution Without Us”, he interviewed drone pilots and intelligence sources, futurists and Silicon Valley specialists in a 3 year exclusive research. Now out in Germany (Plassen Publishing), the technology-bestseller will be appearing in Chinese in early spring (Shanghai University Press). His television company in Dubai is well-networked in the Arab Region.

Jay Tuck has deep knowledge on matters of modern warfare. As a US defence expert and a combat correspondent Jay’s journalist career has brought him much insight to inter­national relations. Jay speaks to private banks and financial institutions, as well as security and law enforcement conferences on artificial intelligence.

Jay Tuck is an internationally acclaimed speaker whose lively talks are accompanied by exclusive video and photographs.