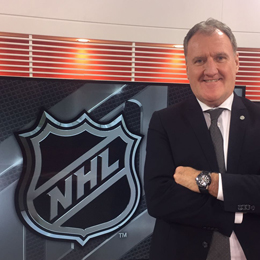 Kent Ruhnke was born in Toronto, Canada and has played and coached hockey for over 50 years. A former high school teacher and graduate of the MBA program at the University of Toronto, Kent and his family are now Swiss citizens. Often referred to as “the Motivator” in the Swiss press, he is a proven winner at all levels of the game. For the last 20 years, Kent has travelled the world speaking to business groups about how to use principles of high level sport in creating a more dynamic, and productive business environment. Kent now works as a Swiss TV analyst for the NHL, the Swiss league and the hockey WM.

A former NHL player with the Boston Bruins and the Winnipeg Jets, Kent has won 6 Swiss championships – as player-coach with the Zurich Hockey Club in 1981, with Biel in 1983, with Olten in 1987, with the Zurich Lions in 2000 (their first title in 39 years), with Bern in 2004, and in 2005 with Basel. In 2005 at the All-star Weekend Awards dinner, Kent was voted the Swiss National League Coach of the Year. He is also a regular writer with his popular columns in the National newspaper the Tages Anzeiger.

Kent’s insights into what makes people and teams perform at their best make him a popular speaker for businesses, clubs and organisations.

With his entertaining and open style, Kent shows how being successful in sport can carry over to success in other walks of life as well.