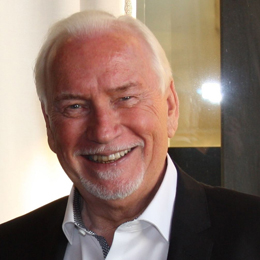 Ray is one of a few commentators equipped to explain how massive challenges of faster technological innovation, globalization and the environmental challenge will affect our futures, the way we do business and the far reaching implications socially, economically and politically.

Ray Hammond started his career as a successful serial entrepreneur. He was the Co-founder of the company that today owns and operates the British television outlet Channel 5 and publications including The Daily Express, The Daily Star and OK! After selling his shareholding advantageously in that company he founded and led International Magazines plc which he later sold to EMAP International in a multi-million pound deal. In 2010 President Mikhail Gorbachev presented Ray with the Medal of the Italian Chamber of Deputies for his services to futurology. Ray Hammond has researched, written and spoken about how future trends will affect society and business for over 30 years. He is a member of the Science Fiction Advisory Council (SFAC) of XPRIZE.

Ray creates an inspirational and breath-taking vision of the future to help the audiences navigate the hyper-competitive virtual economy. He interpretes the vision from a business, social, climate, economic and  political perspective providing a rounded view of how best to prepare an organisation for what the future holds.

Ray requires no effects to enthral an audience! He projects real warmth and dynamism and, using plain language he cuts through complex technical issues, new innovations and business concepts. Ray Hammond is an inspirational orator and steps into his many audiences around the world to personally inspire and motivate them.