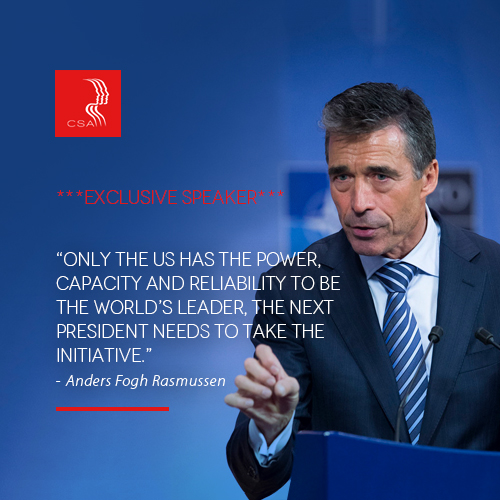 Anders Fogh Rasmussen, former NATO Secretary General, and former Prime Minister of Denmark, has superb international credentials, enabling him to deliver unique insights into upcoming geopolitical trends and international hotspots. It is this, along with his outstanding abilities, which make him recognised as a hugely respected voice in international politics.

Anders Fogh Rasmussen’s new book The Will to Lead: America’s Indispensable Role in the Global Fight for Freedom is being published in September, which is also when he starts his US book tour. It is an impassioned plea to persuade Americans to elect a President who will restore the United States to its proper role of global leader, instead of ‘leading from behind’.

He looks at the qualities of former US Presidents, along with those of other world leaders he has come to know, and puts forward a bold plan for how the US and other nations around the globe can join together to overcome tyranny.

He spoke to correspondent, anchor and financial editor for CNN, Todd Benjamin recently about his book, along with other key topics, such as the importance of the Middle East.

Anders Fogh Rasmussen will be travelling throughout the US during September and October promoting his book and will be available on select dates for speaking opportunities whilst in the USA.

For more information about Anders Fogh Rasmussen and the powerful messages he can share with your audiences, please phone +49 (0)211 3860070 or email info@celebrity-speakers.de