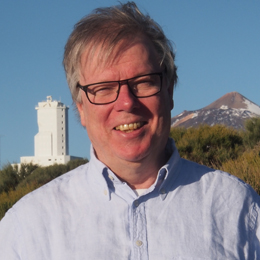 Dirk Soltau is an astrophysicist and worked at the renowned Kiepenheuer Institute for Solar Physics since 1977. Dr. Soltau led the construction and commissioning of the largest German solar telescope on the Canary Island of Tenerife. Meanwhile, he has worked on the development of even more powerful optical systems, which enable observations to be carried out from the ground, for which, until a few years ago, only space telescopes were used.

In 2010, in the year of energy, Soltau is dedicated to the topic of energy: which forms of energy can be harnessed in the future and can be exploited. Dr. Soltau has already published various papers in trade journals. His scientific work takes him to the places of astronomical research all over the world.

In his lectures, he deals with the magic word “Energy” and presents all the different facets of it. As a solar physicist, he has a personal opinion about where the energy of the future should come from. One of its focuses is the development of new telescopes. He is considered as a specialist in one of the latest optical technologies, the Adaptive Optics.

In his amusing lectures that cover the entire field of astrophysics and space research, Dirk Soltau also conveys complicated connections in an entertaining manner. Dr. Soltau abducts the audience into unknown dimensions that inspire new perspectives and ways of thinking. In any case, best edutainment is offered at a high level.

How to book him